Somebody needs to explain why this song is so painfully familiar to me.

Like…I’ve never played any of the Civ games, and the only other song I’m familiar with by this composer is his “Baba Yetu” for Civ IV, but that doesn’t sound anything like this.

It is seriously freaking me out. Why do I feel like I’ve heard this song many, many times before? I’m usually really good at remembering when I’ve heard a song, but I’m having hella troubles with this one.

There are aspects of it that are familiar to other pieces of music I know, yes. 1:54 to 1:56-ish sounds very much like part of “The Launch” from Apollo 13 (especially with the chimes). 2:13 to 2:16 is like part of that fanfare thing they play for the Olympics (edit: which is literally called “Olympic Fanfare,” sorry, John Williams).

It’s a fantastic song, though. Fantastic. I can’t get it out of my head.

Edit: apparently “Baba Yetu” was the first music made for a video game to win a Grammy. I think this song is way better, though.

GUYS I FOUND THE ZEPPELIN GAME

This is the same site on which I found Microsoft Pinball.

I was super into this game in 2008 when I first found it somewhere on the internet and downloaded it. I remember it being really freaking hard. Like, you’d finally have enough money to purchase a second zeppelin and your first one would nose dive into the Pacific, killing all passengers and making you Asshole #1 in the zeppelin world.

Edit: yeah, I tried to play it again. Just as difficult as I remember it being.

Hell, I even played the little Microsoft chess game despite not knowing ANYTHING about chess.

I also cried a lot and wished for death, but that was not exclusive to the first half year of Vancouver.

As someone who’s still obsessed with this game that came out in 1998, I enjoyed this immensely.

The ominous music makes this even more distressing. I love it.

The Idaho expansion pack for American Truck Simulator comes out NEXT THURSDAY!

“All the boys…it looks like “About the Author” profile pictures from, like, math textbooks” is a fantastic line.

It sounds like the next state being added to American Truck Simulator is Utah.

That’s got to mean they’ll do Idaho at some point. I bet they’ll do Colorado too pretty soon. I’m not sure which one they’ll do first (or if they’ll do something like Texas instead), but I think it’s a good sign that Idaho will happen.

THAT WOULD BE SO COOL

This game makes me appreciate the relative realism built into ETS and ATS.

Maddie, does watching this guy’s mad pro bus skillz give you heart palpitations?

Edit: crap, I started my dude in Tucson, so it’s going to take me a while to get jobs that’ll take me to Washington. Darn, I guess I’ll have to truck more.

SUPER COOL I NEED IT

Next they need Idaho. I bet a lot of people would be like “lawl, why the potato state, there’s nothing there!”

I think all of those things would be cool.

Zomg, do you like FPSs? Are you stuck in the early 90s? Do you think Quake is still one of the best games ever made?

THEN YOU NEED TO TRY DUSK

I’m not very far in, but—let me say it again—it’s so good. Most video games don’t hold my attention for very long for some reason. It takes a really special game to keep me actually engaged for any stretch of time. This list of games includes:

I can now add Dusk to that list. I could play this for hours at a time.

*The Sims is…special. I will spend three hours making a family, but as soon as I’m tasked with building them a house, I “nope” outta there to go make a new family. I’m one of those Sims players.

I like to think this is how they storyboarded Infinity War.

Posted in: Games | Tagged: computer game, the sims, the sims 3, video game, video games, when you're bored in the sims so you organize the thanos snap, youtube

Euro Truck Simulator 2, aka The Best Game Ever

It’s very fun. Very relaxing. I delivered beets to Kiel. I only crashed into a few cars. Europe has too many roundabouts.

Have a video! Not mine, obviously.

Is an admirable bakery product considered a roll model?

OH GOD I DOWNLOADED THE SIMS 3.
I haven’t played it since 2012, I’m pretty sure. But I got the urge to play it again the other day and magically remembered my old Origin username and password so that I didn’t have to buy a new copy.

TIME TO MAKE A FAMILY!

Update: I made a dude named Dominic. He’s got a crap job and no money ($14 as of my writing this) and a house that contains the bare minimum furniture to keep him alive and somewhat happy.

Update 2: HE GOT FREAKING ROBBED. The robber stole his fridge. Seriously? The dude was so desperate for a fridge that he broke into the crappiest house in the neighborhood and made off with the crappiest fridge that had no food in stock? Why didn’t the robber steal Dominic’s last $14 to go on a McDonald’s binge or something?

Update 4: Dominic was super lonely (he’s a social Sim), so I made him a roommate named Leon The Lion to keep him company.

Update 6: Leon proposed! Time to plan a wedding. Unfortunately, Dominic wants a lot of people at the wedding, and as of right now him and Mr. The Lion are the only two Sims in the neighborhood. Time to build friends!

So today I’m going to talk about this game:

This is the opening screen from Cosmic Osmo and the Worlds Beyond the Mackerel. It’s almost as old as I am (published in 1989) and is pretty much the only non-shooter game I grew up with (unless you count Spin Doctor as well).

Says Wiki: “There is no goal, no system of scoring points, and nothing that the player can keep in an inventory. A player can be said to have “finished” the game if they’ve explored every area and found every secret, but the game gives no feedback to indicate whether this has happened. Although this is unconventional, it allows finding new secrets to be a genuine surprise, while avoiding the frustration of endlessly searching the game for the last secret to achieve 100% completion.”

And it’s a big game, especially for 1989. And look at these awesome black and white screenshots: 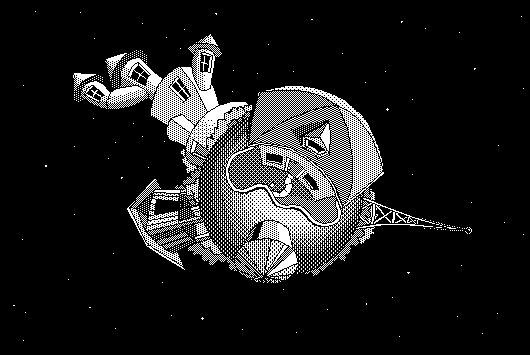 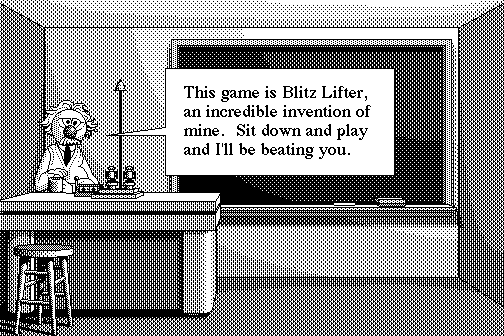 You can buy Cosmic Osmo on Steam (for pretty cheap, I think). I totally recommend it.

(Edit: haha, sorry guys, here’s another one that slipped through the radar during one of my mass postings.)

Oh man. This guy reminds me so much of Ebeeto (Yogi Bear, anyone?). So again, if excessive curing offends you, don’t watch.

Is it sad that my internal dialogue is practically just like this?

Somebody turned off my “ability to give a crap” switch

I have nothing of substance to say today.

I guess that’s not really any different than any other day, but today I’m not masking it by a survey/blathering/stupid YouTube videos.

Sorry. Have to have everything cleaned up and packed by Friday afternoon.
I played Fallout all afternoon.
I have three bobbleheads and have successfully killed about seven Deathclaws, but nothing packed.

Good lord, Fallout 3 is the epitome of awesome. Those of you with an Xbox (or a Steam account or a PC copy of the game) need to play this game. Seriously.

Uh…there was something else I was planning on saying today, but who knows what it was.

TWSB: Portals, Portals, Everywhere and Not a Cake to Eat

Matt, This Week’s Science Blog is for you, ‘cause I know you really dig Portal.

Here on the Steam forums is a list of Portal physics answers (warning: not devoid of childish internet arguing and name-calling).

I like the crushing one (the second scenario). This stuff makes me want to play around with Garry’s Mod.

Just a little tidbit of the internet to lighten your day. My day’s pretty much sucked, at least, so I hope yours is going better.