I feel so completely demotivated for like the past half year. I don’t want to do anything and feel like I can’t even concentrate long enough to finish one sentence before getting distracted or trying to find something that will hold my attention.

It sucks and I hate it.

I don’t care about this blog anymore

I don’t care about anything anymore, really.

I am So. Goddamn. Sad. I hate the end of the year/beginning of the year. It always makes me very depressed no matter what the circumstances.

On the plus side, though, look at this manlicious thing I get to stare at above my computer desk now.

This just in: I feel like garbage, so all you get for a blog post is this.

Do you ever feel like a box of turds for no discernible reason?

It might be because I didn’t walk to campus today. I wanted to give my feet a bit of a break because I’ve walked 71 miles over the past week, but maybe my body’s so used to the walking that it goes into “I’mma feel like garbage” mode if I don’t walk more than 5 miles in a day.

Ever had one of those days where you’re super sad for absolutely no reason?

That’s today for me, y’all. So this is all you get.

I am inadequaaaaaaaate why am I even in grad school?

[I can also feel inadequate because I totally skipped over this post back in November when I was supposed to post it.]

Posted in: School | Tagged: blah, go away, grad school, i haaaaaaaaaate myself, inadequacy, u of c

How many posts have I titled “Blah” now?

Ugh, today was a crap-mobile. And my fridge is broken and all my broccoli is half rotten and I am sad and cold and frustrated.

So you get humor.

Posted in: Humor | Tagged: blah, canada, google search, vice.com, what we learned about canada by looking at your weird google searches 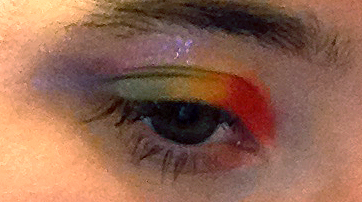 (Ignore the giant shadow that makes me look like I have a black eye. Crappy lighting, yo.)

Posted in: Art | Tagged: blah, eee makeup?, is this art?, TAGGIN' FOR NO REASON!

Photographic proof of the kind of week I’ve been having:

Yeah, that’s the mouthpiece for my clarinet. Good thing we don’t have a concert tonight, right?

Well, this week’s gone to hell.

Things that cheer me up:

And the comments on the Hitler in Captain Planet video:

Posted in: Miscellaneous | Tagged: "stop bidding against me or I WILL INVADE YOU" is the fucking quote of the century don't even argue with me, blah, captain planet, hitler

I feel freaking horrible today. Very, very lonely and without motivation for the first time this semester. I think I’m realizing that like 90% of my friends are in steady relationships with someone or other and I’m still alone.

But seriously. I wouldn’t mind some companionship; it’s been like three years.

I miss happiness and I miss control.

But I mostly miss control.

Okay, that’s a bit of an exaggeration. But this year’s still kind of sucky.

This week in particular has been one long string of bad news. I know you’re all probably sick of me complaining here, but I need someplace to vent before I start stabbing peoples. You all know how I like plans, right? Well so far this year it’s been very, very tricky to make any sort of concrete plans. That’s very difficult for me.

On a positive note, I (accidentally) sliced the hell out of my ankle with my razor while I was shaving my legs and didn’t even really bleed. Vitamin K, people. It makes you a god.

30-Day Meme – Day 2: Your favorite movie.
I’m not a movie person. There are approximately seven movies in existence that I would willingly suggest watching if I were in the position of HAVING to suggest a movie for lack of better alternative ways of wasting time.
But one movie I could watch again and again and again (and have) is Apollo 13. Why?

1. Tom Hanks. He’s badass and, in my opinion, one of the better actors out there.

2. Kevin Bacon. See above, plus the fact that he also starred in Tremors as a random cowboy makes me laugh every time I see him as an astronaut in this movie.

3. I have a thing for movies about space. From the more “accurate” movies like this one to the all-out corny “AMERICA, FUCK YEAH!” movies like Armageddon, space movies have always been of interest to me.

4. The soundtrack. Particularly the track “The Launch.”

Feel like total crap. No motivation, no will to do anything. Want to curl up and die in a dark corner. Blogging not happening today.

Solution: apartment temperature cranked to 78 degrees, Top Chef, making pretty graphs for my thesis, and not going to campus.

Why isn’t there a MyLifeIsPathetic.com yet?

I hate those days where everything’s going great, and then all of a sudden you get this extreme onset of anxiety regarding the rest of your life. Like, to the point where you don’t see the point of going forward because every possible direction you can think of for yourself seems like such an effort that there hardly seems to be a point to it all.

Whyyyyyyyyy does this happen daily all of a sudden?

If an atomic bomb falls in the forest…

Today’s one of those days where I just want to fall off the planet. Ever have those days?

I’m not the “run away from my problems type,” but sometimes it’s the most appealing option I’ve got.

Sorry this is short.

It’s Saturday night: do you know where your sanity is?

Yet another weekend alone with nothing exciting to do.

Solution: self-pity, colored pencils and an extremely detailed drawing that won’t be finished without another 100 hours poured into it, and Cast Away.

Today’s song: Sweet Lady by What Made Milwaukee Famous

Posted in: Life | Tagged: blah, life's as exciting as a white crayon

I don’t know what’s up with me these past few days. I don’t want to ride the bus. I don’t want to leave the house. I don’t want to stay inside, either. There are a zillion spiders trying to break in here. It’s dark. It’s cloudy. I itch. Every night I’ve been here I’ve had a nightmare. I just want to curl up in a little ball and die there.
This feeling is obnoxious and I hope it goes away soon.

I feel like crap today, so I went to Hastings to get some music. I bought a CD from a band called Statistics (for obvious reasons), and it’s actually not too bad. No Promises is pretty snazzy.

Sorry most of these have been so short. September’s always a month that drags (or sucks).