In completely unrelated news, Alberta published its “here’s how we’re going to re-open the province” plan. Let’s see what we’ve got.

May 14 sounds awful soon for some of the “Phase 1” items. Farmers’ markets? Hairstylists/barbers? Daycares and summer camps (even with limited occupancy)? That seems…frightening. Hopefully enough people share my same sentiment so that these places won’t be overrun by peeps. Or maybe they’ll push it back.

Also, movie theaters in stage 2? And schools, even with restrictions? Oofs.

And I might just be missing it, but I don’t see anything on there about universities. Who knows when that nonsense will reopen.

I’m glad there are no set times on stages 2 and 3, at least. I think Alberta has done a really good job of dealing with all of this; I just hope they remain as cautious and health-focused as things start opening up and the economy starts chugging again.

We don’t want to have to do all this again in a few months.

This is scary. Compare this to a pic of this website that I took back on March 26 (almost exactly a month ago). 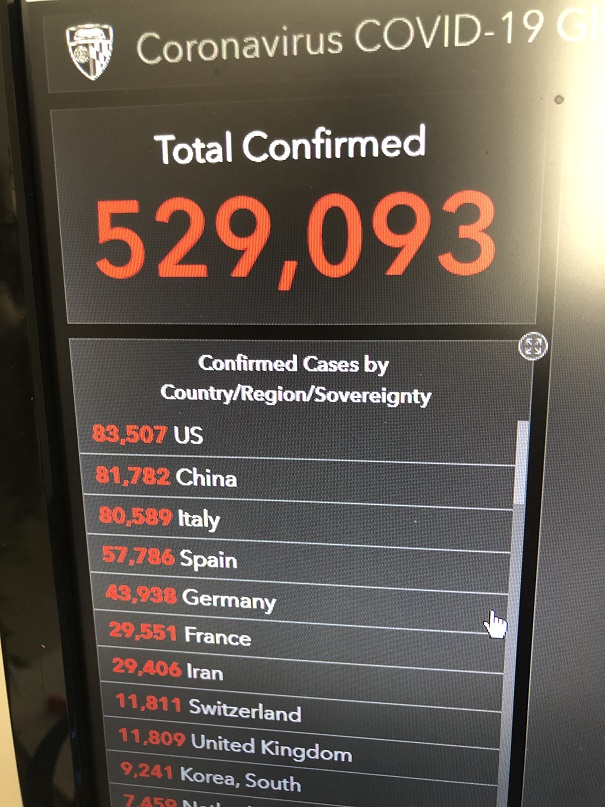 Too bad I didn’t have Canada on that first screenshot. We’ve shot up quite a bit, too, but not nearly to the extent that the United States has.

And some states still want to start opening things back up soon, huh?

You know it’s pretty bad when the President of the United States of America basically preaches an idea that was in an episode of Metalocalypse several years ago.

Posted in: People | Tagged: coronavirus, covid-19, donald trump, metalocalypse, trump, united states, why did so many people vote for him whyyyyyyy, youtube

Perhaps this will all be over by the time I post these blogs and this website will either be defunct or just a memory of this rough time, but until then, here’s a world map of COVID-19 cases.

Y’know, in case there’s anyone out there who hasn’t seen this yet.

United States, you need to chill.

Do the Covid-19 Panic

So is anyone else experiencing some serious COVID-19 symptoms that are completely psychosomatic in nature?

I feel like I’m coughing more, even though I know I’m not.

I feel feverish, even though I’m not. I take my temperature like seven times a day and half the time my temp is below 96 degrees (I’m a lizard).

I feel like I’m having trouble breathing, even though I’m not. I can take deep breaths without struggling, I’m not wheezing or feeling a rattle or anything like that. And I’m pretty sure I couldn’t run seven miles if I was having actual breathing problems. I think part of this “symptom” is that when I’m working at home at my desk, I hunch over way more than I do at my office desk, which makes my lungs feel a bit more compressed.

But yeah, fun times. I’m pretty sure I’d actually be someone who showed no symptoms if I ever did get the virus, ‘cause that’s just how it would be.

Hey friends in the United States, is it as bad down there as the news is making it sound? ‘Cause it sounds pretty bad.

Obviously no one is really focusing on Idaho; how’s Idaho? Is everyone walking around in fear of getting the virus? Is Gritman overwhelmed? Are people protesting the shelter-at-home orders to get back to work?

Obviously Canada is getting hit by this as well (just like the rest of the world), but I think the biggest difference between Canada and the US as far as how this is being handled is in how it’s become such a political thing in the US whereas up here, we haven’t politicized it.

At least, not nearly to the extent that the US has.

It’s interesting and weird and scary.

And this is going to sound really stupid, but I feel guilty for not being in the United States. I feel guilty for living in a country that seems to be handling this quite well while like 99.8% of all the people I’ve ever cared about are getting traumatized by the Trumpster Dumpster and his complete incompetence. It sounds scary down there, and I feel guilty for not having to share that scariness, if that makes any sense at all.

Annnnnnnnnnd now I have to work from home.

We can technically contact our supervisors if we “can’t or don’t” want to work from home, but I don’t want to be that guy who goes against the “let’s get this under control” rules just for the sake of convenience.

So I guess tomorrow I’ll haul all my nonsense home and hope that I’ll be able to concentrate well enough here to actually work.

(I might also try running outside tomorrow, since we’re finally getting a day where the weather is no longer in Super Winter mode.)

Posted in: Work | Tagged: coronavirus, covid-19, u of c, university of calgary, work from home

I’m actually surprised they waited so long, but the US-Canadian border is now closed to all “non-essential” travel.

It’s only closed for 30 days, but I suspect it will extend for longer than that.

I know that this closure was a mutual decision between the US and Canada, but if things start to get really rough with all of this (economy-wise, especially), I really hope it doesn’t drive a wedge between the two countries. I’ve posted this video before on here, but I’ve been thinking about it with the recent talk of closing the border (and, of course, the actual closing of the border today).

A Campus Without Students

I submit to you some very creepy photos of the University of Calgary without students. 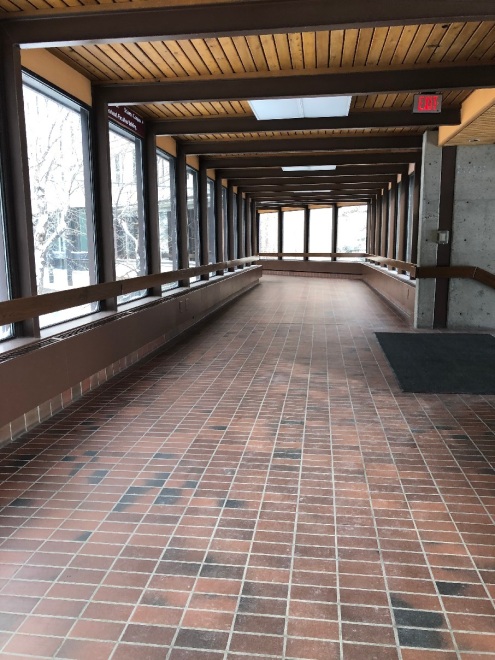 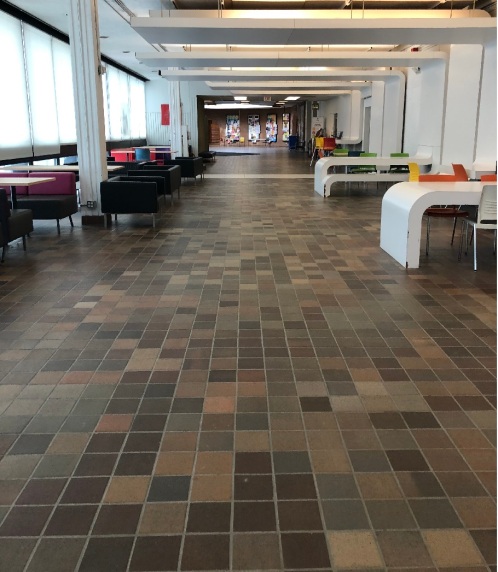 Posted in: Work | Tagged: campus, coronavirus, covid-19, u of c, university of calgary

I will now be delivering my courses through The Tubes

Classes have been cancelled today, too, because it sounds like they realized that asking instructors to completely readjust their courses with less than 48 hours’ notice was a little rough.

Which is good for me, since it’ll put my video lecture recordings two days ahead of when they need to be posted rather than just one. Buffers are good.

BLAH SORRY too busy to blog.

(Also, I will never tire of referring to the internet as a series of tubes. Never.)

Posted in: Work | Tagged: coronavirus, covid-19, teaching, u of c, university of calgary

Yup, I was right. We got the email today that we’re supposed to use this weekend to convert our classes to some sort of format that can be delivered online; students will not be coming back to campus for the foreseeable future.

Converting to an online format won’t be too hard for my courses, but I imagine there are a lot of profs who are in a bit of a panic right now. Two days is not a lot of time to make this transition…

Posted in: Events | Tagged: classes, coronavirus, covid-19, u of c, university of calgary

So classes were cancelled today.
Classes are never cancelled here.

It can be -40 degrees with ice covering every inch of every road and the U of C will still be like “lol campus beckons, children.”

From what I’ve heard, the last time classes were cancelled was during the 2013 floods.

I suspect they’re going to have us move to some sort of online format. When? Who knows. It wouldn’t surprise me if we have to do it over the weekend, even though as I’m writing this it’s 5 PM and we haven’t gotten any information yet other than that classes are closed today and are supposed to resume “in some format” on Monday.

Edit: NOOOOOOOOOOOOOO BASEBALL IS BEING POSTPONED
HOW AM I SUPPOSED TO L I V E

Posted in: Events | Tagged: classes, coronavirus, covid-19, u of c, university of calgary

So I’m calling it right now: things will not be back to normal enough by the end of June for us to go on our super cool retirement trip for my mom.

That is pretty much the only thing in my life that I’m looking forward to right now.

Edit from mid-April: hahahaha, yeah, no way in hell is that trip happening. I’d be surprised if I could visit my mom at Christmas.

I want to preface this blog by saying that given the current circumstances, Nate and I have it pretty good.

So our situation could be much, much worse in many different ways.

But that doesn’t change the fact that I am angry and disappointed.

I’m angry that my mom is finally able to retire this year but won’t get to travel (at least for a while), which is what she immediately wanted to do. Hell, she can’t even go to, like, a mall to celebrate.

I’m angry that Nate and I had an awesome retirement trip planned out for her that was going to be awesome for all three of us. Redwoods? Mets games? Family hangout time? Gone.

I’m angry that I’ve finally gotten a semester completely off for the first time since 2017 and most of the long walks that I haven’t been able to do because I’ve been too busy I now can’t do because of social distancing restrictions (or just general “I don’t want to take the risk by going to Walmart/taking the bus/sharing this path with 100 people who don’t understand the concept of covering their mouth when they cough).

I’m angry about not knowing how long all this will last.

I’m angry that my parents are in one of the most at-risk populations and, due to the border being closed and airlines being NOPE, it would be very difficult for me to get down to them if either of them got sick.

I’m angry that there are probably enough people who are still not taking this seriously enough that a second surge of this thing is probably going to hit once we start gradually opening things back up.

Sorry for the complaining. I need to do it somewhere.

Well. That story wasn’t supposed to be non-fiction! Luckily this virus seems a lot less dangerous than the illness in my story. In my story, no one knows exactly what this illness is, how it spreads, or how it’s related to any other illnesses, which really gives them no way to treat it. Also, it’s got a 100% mortality rate, so…

Edit: I just realized it’s the same freaking ship as the one in my story, too. Fantastic.

Edit from mid-April: okay, okay, 2020 is COVID-19’s bitch. I concede. But on a personal level, this year’s actually going pretty well so far, too. I’m still sad and angry and hate myself on a cellular level, but at least I’m accomplishing my goals.