I am 100% convinced that my shitty GRE scores were the reason that I didn’t get into any US schools for grad school. BUT LOOK WHO HAS TWO MASTERS DEGREES AND IS SUCCESSFULLY TEACHING MATH/STATS AT A UNIVERSITY NOW, HUH?

Sorry, it’s been a decade and I’m still bitter about the fact that the GRE results outweighed everything else that was stellar about my undergrad performance.

And I’m finally going to say that my undergraduate performance was stellar, ‘cause it fucking was.

Also, for anyone else going into STEM who thinks the GRE belongs in the toilet and should not be used as a factor for deciding admission: check here.

But whatever, you know? Either I make it through this class or I have to stay an extra year and torment those who don’t want me around.

Those who shall not be named.

Had a midterm today.

UGH THE TEST IS OVER. Thank god.

It wasn’t awful, but I know I made at least one—maybe two—stupid little mistakes. I’m hoping Dr. Lu will be merciful and see that I do understand what I’m doing, I just made dumb math errors.

‘Cause that’s what I do.

Now it’s time to do nothing school-related for the rest of the day.

Posted in: School | Tagged: grad school, test, u of c

That makes me super happy. Not as happy as A’s on BOTH of those freaking tests, but it least it raises my average up to an A- in the class.

Now all that is left is the final.

(I’m going to go pass out from relief.)

UGH THE TEST IS OVER. I think I did okay. Hopefully. I kind of “blacked out” during it, meaning that I don’t really remember doing any of it, it just kind of happened.

But that’s good! That’s something that usually happens when I know the material well, and it usually results in a good grade.

NOW I CAN RELAX FOR A LITTLE BIT HOLY HELL.

Well, I’m pretty sure that was the worst I’ve ever done on a test.

I guess we’ll have to wait and see until next week to see if my “Complete Loser” status is confirmed.

I’m going to go die in a corner now.

Posted in: School | Tagged: FFFFFFFFFFFFUUUUUUUUUUUUUUUUUUU, grad school, it's not like i didn't know the material. i'm just a turd, test, test anxiety, u of c

(This was supposed to be yesterday’s blog, but in the wake of the Ottawa incident, I decided to delay it until today)

The “good”: The class average on that midterm I had last Friday? 15/30. All the people I study with got 14s. The obscenely smart 2nd year guy got like a 25. A few people got a “see me” written on their tests by the prof (not sure who, though).

Seriously, a 19 out of 30 BLOWS HEAVY METAL DICKS, but I probably would have gotten a higher grade had I actually finished (I accidentally screwed up on one question and had to go back and correct a bunch of math and lost a lot of time), so there’s that. Also, a 19/30 is a 63%, which is actually a high C here. Also also, this midterm (and the next one) are each only worth 20% of our grade.

So I’m certainly not proud, but I’m not in panic mode (yet).

Edit: I talked to my supervisor (who teaches the class, haha), and he said my grade was actually one of the highest ones and told me not to panic. He said some people got 7s and 8s.

“Our distribution, which art bivariate, normal be thy name. Thy z-scores true, covary too, in yhat as it is in the x’s. Give us this day our regression equation, and forgive us our error, now and in the hour of prediction. Amen.”

Just a little something I came up with last night. None of us know how we did on the midterm, so we all probably did pretty poorly.

Also this. Stifling my laughter ‘cause I was still in my office = fail.

Stress relief via the internet!

Tonight I took an online test that was structured after Gardner’s multiple intelligences theory, which states that there are several different types of intelligence and that people have strengths and weaknesses in the various types. I took one early tonight, but I misplaced my results and didn’t want to go back and do it again, so I did a different one here.

My results (the higher the number, the stronger I am in that area):
Linguistic: 9
Logical-Mathematical: 10
Spatial: 10
Bodily-Kinesthetic: 6
Musical: 8
Interpersonal: 3
Intrapersonal: 9

A Short Definition of your Highest Scores
Logical-Mathematical – the ability to use numbers to compute and describe, to use mathematical concepts to make conjectures, to apply mathematics in personal daily life, to apply mathematics to data and construct arguments, to be sensitive to the patterns, symmetry, logic, and aesthetics of mathematics, and to solve problems in design and modeling. Possible vocations that use the logical-mathematics intelligence include accountant, bookkeeper, statistician, tradesperson, homemaker, computer programmer, scientist, composer, engineer, inventor, or designer.

Spatial – the ability to perceive and represent the visual-spatial world accurately, to arrange color, line, shape, form and space to meet the needs of others, to interpret and graphically represent visual or spatial ideas, to transform visual or spatial ideas into imaginative and expressive creations. Possible vocations that use spatial intelligence include illustrator, artist, guide, photographer, interior decorator, painter, clothing designer, weaver, builder, architect, art critic, inventor, or cinematographer.

Holy crap, today was the most stressful day of the entire semester. Let me tell you why.

So remember that stats test I took last Wednesday? We got that back today. What was the number on the top?

You can imagine the flip out that ensued. It was all over. Goodbye GPA, goodbye Summa cum Laude, goodbye grad school.
In the midst of this panic, I realize two things. One, he’s going over the test, and then two, my answers on the first page that were marked wrong (all of them were) matched the correct answers he was giving us. I took this up with him after class and long story short, I didn’t get a 65, I got an 80. Yes, that does make me very, very happy, but DEAR GOD I ALMOST LOST IT in class when I saw that 65. If you ever wanted to see the visual display that would accompany someone’s dreams getting crushed, you probably should’ve seen my face when I got that test back. Plus, an 80 still sucks; I’ve given myself a small 15-point window of error for the remaining 150 points in the class. Can I pull it off?
That’s a good question. I’m certainly going to do my best. There’s no way in hell I’m letting a stats class ruin my 4.0.

Second stressor of the day: I get back to my dorm at about 4:30 after research and I chill out for a few minutes, waiting for registration at 7, and am just about to fall asleep in my chair when it dawns on me that I still haven’t turned in my petition to take 22 credits—my limit is set at 20. The registrar’s office closes at 5. I look at the clock. 4:55. I don’t think I’ve ever moved faster in my life. I got there in time (barely) and got that taken care of, so that was good.

Third stressor of the day: with my credit limit taken care of (at least for now, I still have to get that other petition in), nothing was left to do but wait for registration at 7. By 6:58 I had all my little CRN numbers typed in so that I could just hit “submit” at 7 and it would all go through. No problem, right?
Ha.
All my classes go through…all except one: my stats class. My graduate-level stats class. The one I was assured by my advisor that I would get into (“there are no undergraduate restrictions to get into graduate classes!”). Yeah, apparently there are. So that’s just one more thing I’m going to have to straighten out sometime soon. I’m not posting my schedule tonight ’cause it’s not complete; I’ll do it once stats works out (that is, if it does at all).

So how did I relieve all this stress? I talked to Sean and I made an album cover. Observe:

Pitchfork and little horns were added by yours truly. I can’t decide if I like this one or not.

If Godot falls in the forest and no one is around…

I took my Symbolic Logic test today. The first three pages were fine, just translations, truth tables, DeMorgan’s Laws, and a proof step proof (no subproofs). I finished in 15 minutes.

Then there were the proof method proofs (aka proofs with subproofs embedded).

There were four on the test; we had to choose two and prove them. I proved one relatively quickly (because it was essentially the definition of a biconditional), but then I literally sat there for 45 minutes just staring the other three down, racking my brain to try to figure out whether or not I could figure out how to prove one.

Finally, the lightbulb came on with one and I crapped out a proof in under 10 minutes (not easy, trust me).

So I got home and tried plugging my solution into Fitch, and if I did it the way I think I did on the test, I got that one right. 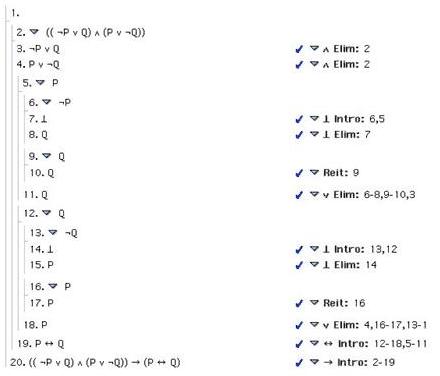 Yay? Maybe? I hope I did okay.

I got my first stats 401 test back today and I got a crappy 84% on it. I actually think I did better than that, I think at least one is scored incorrectly, but still. A low B is crap in my book, I don’t care that it’s a 400-level stats class.

I say unto myself: fuck.

I’m trying to rationalize the situation rather than freak out about it. I figure I got an 85% on my first geography 100 test (I know that sounds horrible for a 100-level class, but in all honesty that man did NOT know how to write a test) and still pulled an easy A in that class (subsequent tests were 90% and 95%), so I’m hoping that’ll be the same way with 401, now that I know what his tests are like and all.

Still, though, I’m quite disappointed in myself.

So right now I’m trying to cheer myself up. Here are the fruits of my search for humor (note: some of you ABS frequenters may have seen many of these):

Txt Msg Brkup by Kelly. The skit at the beginning’s hilarious, and the (ex) boyfriend’s reaction to Kelly at approx. 5:05 makes the whole thing worth it in my opinion.
Yatta! I love animutation. Catchy li’l thing…
IF YOU HAVE NOT SEEN THIS, YOU HAVE NOT LIVED!
Attention Deficit Disorder in Flash form
Why can’t I think of awesome stuff like this?

Yeah, these cheered me up, but they have not erased my failure in my mind. I shall now hope that going to get my test looked at tomorrow will help.