A Recipe for Disaster (or tasty noms, at least)

It’s the semi-monthly recipe list, ‘cause I like sharing tasty-looking things with people who may actually cook them (as opposed to just gawk at them and then make the same broccoli and penne or spaghetti that they make every night).

Potato gnocchi with mushroom sauce (this one’s for you, mom!)

A clone of those phenomenal Gardetto’s rye chips

Remember when life was fun?

Have some foods. (Note: some of these were added after this blog was written on the 7th)

Super moist cornbread (have I mentioned enough times on here that I EFFING LOVE CORNBREAD?!?!?!?)

Posted in: Food | Tagged: chunky or gtfo, fight me, my mom's going to disown me over this post haha

So in a super scientific Twitter thread, people are debating the best Chex Mix piece and it’s getting heated about that rye chip.

In case anyone’s curious, for me it’s:

Posted in: Food | Tagged: chex mix, the rye chip is so superior to the others it's not even worth comparing them, twitter

Probably not, but you’re going to get them anyway.

Pappardelle with mashed peas and pecorino

Creamy tortellini with spinach and mushrooms

Q: what’s the only food-related opinion more controversial than one’s opinion on whether or not pineapple belongs on pizza?

A: which stage of a banana’s ripening process is the “ideal” banana.

And here’s the “scale” people were looking at when they responded, by the way:

I’m one of those weirdos who likes brown-ass bananas; I’d say my preferred flava-flav occurs at 13 or 14. The 10 is like my lower limit. The more yellow it is, the more it seems to have a slimy texture to me. Once it starts browning up, the texture changes to this gritty sort of mush, which sounds absolutely gross as I’m typing it out, but actually is quite enjoyable.

Some of the comments on this post are great, by the way:

Where are you on the banana scale?

So for the first time since I’ve been with Nate, my mom was able to come up and meet us at Nate’s parent’s place near the border and spend Canadian Thanksgiving with us. It was super fun! It was also hard not to jump in my mom’s car and just go back to Moscow, haha.

ALSO, my mom made the broccoli cheese thing that we (my mom, dad, and myself) always used to have at Thanksgiving and Christmas. It was the first time I’d had it in a long time and holy hell I forgot how good it was.

I’ve mentioned the recipe for it in my “Master Recipe List” that I posted a while ago, but I’m going to link the blog with that document here, ‘cause I highly recommend trying it out. So tasty.

This is probably going to sound really stupid/weird, but I’ve always kind of wanted to work at sea. Like, ever since junior high or so, I’ve had this weird fascination with wanting to work/live on a big ship. I have no idea why; it has zero correlation with any of my other dreams or desires. But it’s always kinda been there, and it’s a little embarrassing to admit for whatever reason (probably because I imagine the reaction to this dream being a judgmental look and a “pfft, you? Please.”).

Posted in: Food, Miscellaneous | Tagged: cooking, cooking breakfast for 1500 on a us navy ship, youtube

LOOK AT THIS FREAKING PIZZA 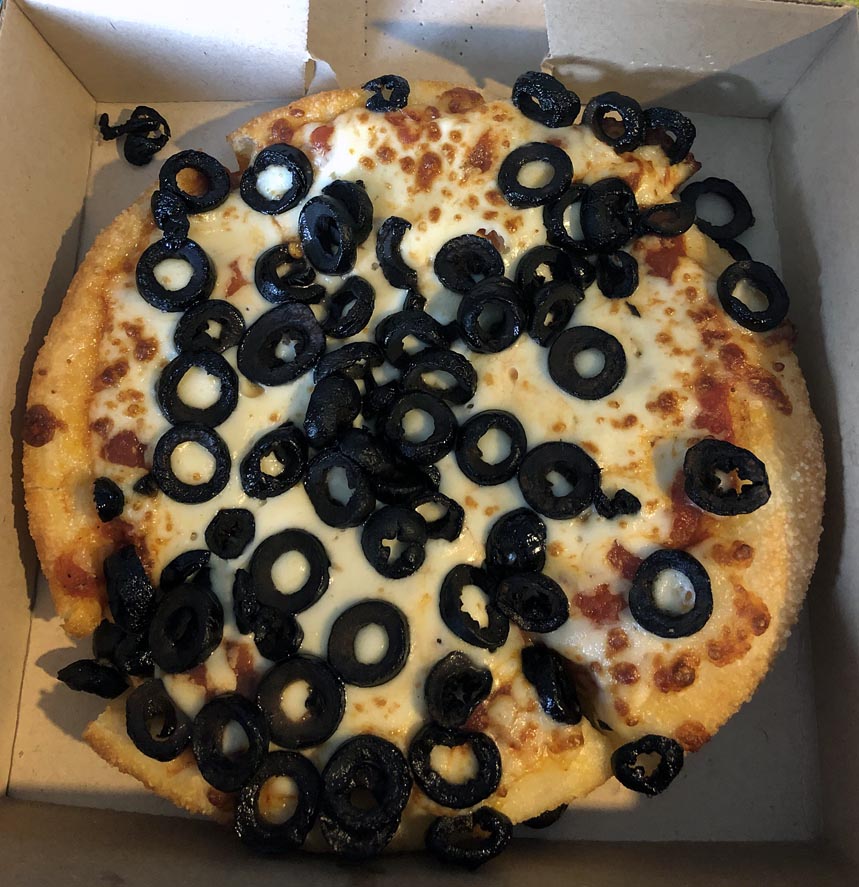 HOW GOOD DOES THAT LOOK???

I haven’t gawked at food for a while.

So let’s do that.

This is super cool and interesting.

Why? Because I produce nothing but quality blog content, that’s why.

Disclaimer: there are like 600 different pasta shapes, so I’m going to limit this to pasta shapes that I am relatively familiar with and/or have seen in the wild to avoid this blog dragging on for ever and ever only to contain obscure pastas that no one’s ever heard of. Like, “bigoli” sounds like a fake Italian word that someone came up with when pretending to be Italian and is thus hilarious, but I’ve never seen it on a shelf, so it’s not gonna be on this list.

[Edit: this list is a lot shorter than I thought it’d be, haha. I GUESS I AM NOT THE PASTA CONNOISSEUR I THOUGHT I WAS MY LIFE IS A LIE]

Pappardelle
Confession: I have never actually had pappardelle noodles, but this is the tastiest looking pasta in the universe.
Seriously, look at it. 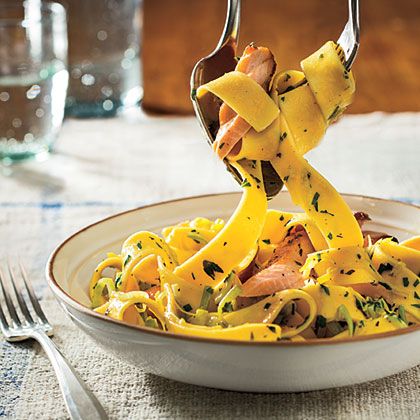 Penne
Penne is my bro, but only if it’s got the ridges. The smooth ones look like weird sharp penises and that’s not super appetizing.

Spaghetti
The good old standard. But I’m super picky about what spaghetti is the best. Some brands make it too thin, and I don’t like thin pasta. Winco’s brand is actually the best.

Ravioli
I used to make ravioli (“make” as in boil pre-made stuff I got at the store) at like 1 AM after I got back from work when I worked the closing shift at Wendy’s. It had like twenty cheeses in it. Fantastic.

Rotini
How to make the Food of the Gods™:

Linguine
Not quite as good as spaghetti, but a nice flat, not-too-skinny pasta that will sub for spaghetti if necessary.

Conchiglie
Little shells! Super cute. I actually don’t think I’ve had this type of pasta since I was a kid, but I remember really liking the texture of it. I liked cupping the shell around the tip of my tongue.

Conchiglioni
GIANT SHELLS! Never had them, but they look cool.

Fettuccine
Fettuccine works if you’ve got the right set of “other” ingredients, but I don’t know if it would always work. If that makes sense.

Lasagna
This is low on the list because who in the hell eats lasagna noodles outside of actual lasagna? I feel like they’d be super weird. …Now I want to try it.

Tortellini
Another pasta that I’m pretty sure I’ve never had. They look like ravioli with a little too much pasta bit and not enough filling. They also look hard, and pasta should be mush.

Farfalle
Li’l bow ties! Cute, but I’ve never had them. I suspect a weird texture.

Alfabeto
The fact that alphabet pasta has an “Italianized” name is freaking adorable. I like it.

Capellini
Too skinny. Weird texture. 0/10 would not nom again.

Orzo
Is it rice? Are they larvae? Is it a mix of the two? Risotto’s evil twin.

…This was an exercise in “how can I waste my time this evening?”

I love black pepper. It’s basically crack to me because I need it on foods in order to live.

I put a metric ton of it on my scrambled eggs tonight and then, while waiting for them to cool down, decided to read the back of the pepper container. 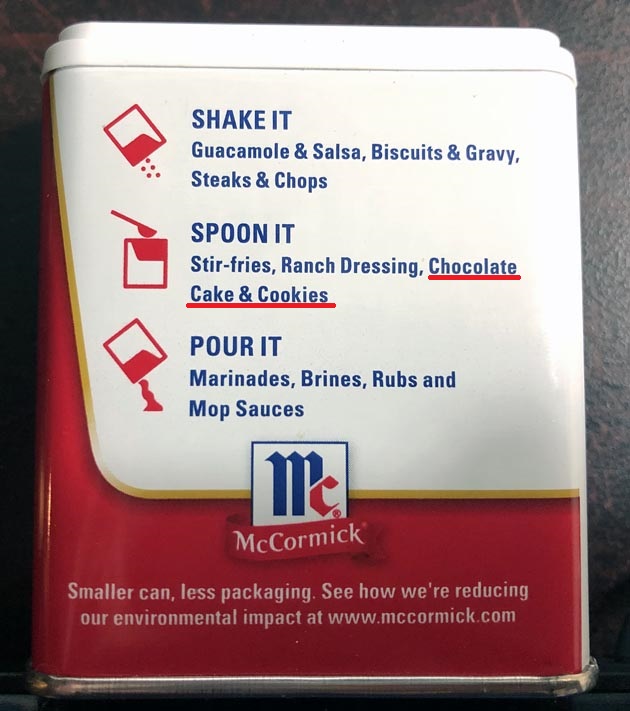 Do…do you put ground black pepper in cake? Is this a real thing? Or has McCormick been smoking too much of its own crack pepper?

Like, I initially thought this might just be a “generic back of package” blurb, but the wrapping says black pepper on it.

So I measured it out today: I put 6 grams of black pepper on my pasta/broccoli. That’s 113 shakes of the pepper shaker.

Posted in: Food | Tagged: black pepper, give me the burn or give me death, pepper

AAAAAAAAAAA look at how tasty these look!

I should try the recipe. Soft tortillas are the bomb.

That has nothing to do with anything and was not triggered by actually having cornbread recently, but I have nothing else to say today and I wanted y’all to know.

So I just realized that I’ve been having the same thing for dinner for approximately 10 years (there’s been a little variety in there, but not much) and have never shared it with you.

So here it is!

Super simple and super tasty. I found the recipe in Vancouver on one of those rubber bands that holds bunches of broccoli together and have been making it ever since.

YAY SORRY I AM BORING

Sweet dreams are made of bees / holy shit, that’s a lot of bees

Mom: You should eat more protein; it might help your leg heal faster.
Me: Okay! *eats entire bag of cheese*
Me: Leg, why aren’t you better?
Leg: …
Me: Do…do you need more cheese?
Leg: …
Me: You probably need more cheese.
Leg: Maybe you could stop pounding me into the pavement for four hours every day, that might help me feel better.
Me: *buys more cheese after 15-mile walk*

I…I don’t do well with moderation.

CHEESE IS THE BEST

Dinner: a handful of shredded cheese

Posted in: Food | Tagged: except cheese, screw everything

Woah, this is super satisfying and calming.

Here is a visual representation of how badly I want carbs right now:

Posted in: Food | Tagged: carbs, I GAVE YOU A PITA TWO HOURS AGO WHAT THE HELL DO YOU WANT???, stupid freaking body

You probably don’t since I just posted one of these like two weeks ago, but hell, you’re gonna get some. Deal with it.

There will be more. There’s always more.