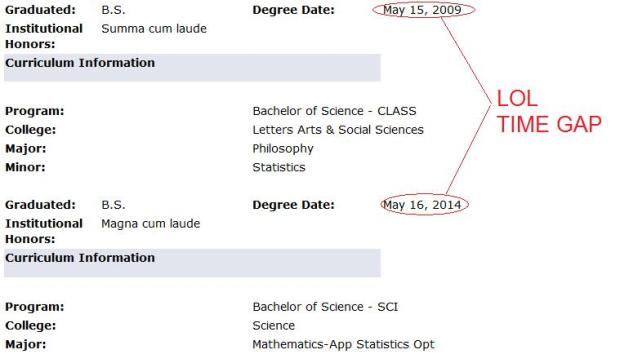 In my defense, there was a Master’s degree and a year off in between those two degrees, so yeah.

So I met with my advisor today. After explaining that the reason I didn’t take half the classes I’d told him I’d take this semester was because I’ve got the best job EVER, he confirmed that my classes for next semester were good choices.

We also talked about what the heck I’m going to do for the next couple of years. While I’d like to get an actual factual math degree, we both agreed that the more practical (and equally awesome) plan should be for me to fill in my missing math knowledge (the calculus series, the two mathematical statistics classes) and then apply for a stats PhD somewhere. Unfortunately (fortunately? I don’t even know anymore), said PhD, if it were to occur, would not occur anywhere around here, ‘cause neither U of I nor WSU offers a PhD in statistics.

Of course, I’m going to try for the best programs in the country, which I might actually have a shot at considering my old (and TERRIBLE) GRE scores are going to be invalid by next October so I’ll have to retake that (after studying this time, of course).

BUT, I think I’ll have to be here two years, and in that time I think I can actually get a BS in math ANYWAY, so how cool? And I’m glad for the two years, anyway. I’m so sick of moving.

Here is some fun data. Or disturbing data. Depending on how you see things.

Those two bars below Idaho are Alaska and Washington, D.C.

The national average percentage of students graduating in four years or less is 31.3%?

The national average percentage of students graduating in six years or less is 56.0%??

Of course, this is to be considered.

Eight Days Left, Half Way There

Hey, I formally graduate with my MA tomorrow. Snazzy.

That is all. It’s been a crappy day.

The cylinder may have graduated, but the thermometer has many degrees

Let’s see, what else happened…

Also, even though there were six (I think) philosophy majors graduating, I was the only one who actually walked. This wasn’t awkward at all except for the college receptions after the main ceremony. CLASS was in the Memorial Gym, and when I went inside there were all these different signs for the different majors, under which the graduates were supposed to gather.

I was the only one under the “philosophy” sign. But it’s okay, ‘cause my mom got a picture of me giving a big thumbs up underneath the sign. And the department head came up to me—apparently I went to school with his son—and congratulated me on finishing in three years.

Oh, but what was really cool was that the last song I heard the band play as we were leaving the Kibbie Dome was “School’s Out for Summer.”

That’s the first song we played in band camp my first semester here.

Yay! My degree came in the mail today! 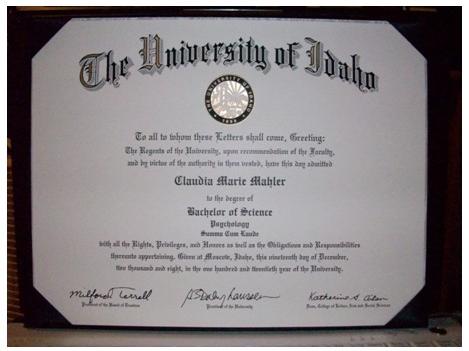 So I got what I have been working for so hard these past five semesters. I finished college with a 4.0. I feel slightly proud of myself for the first time since starting at this stupid school.

FINALLY.
This was the longest semester in the history of the universe, I swear. But now, finally, it’s over. I’m past caring about much of anything, I’m just glad it’s finally done. AND I NEVER HAVE TO GO BACK IF I DON’T WANT TO.
That is a liberating feeling, my friends.

Scaring the hell out of me right now. I’ve come to the realization that this will be my last “important” semester here, and if I screw things up now I’ll lose my 4.0 in the final stretch.

That is pretty sweet, if I do say so myself.

Also, here are some random facts regarding the classes offered here at the U of I that I’m sure you don’t care about in the least:

The smallest college in terms of classes offered is the College of Business and Economics, which is funny, ’cause Business is one of the more popular majors. There are 188 different classes offered under this college

Oh, and did you know that the Environmental Science major falls under CLASS rather than the Agricultural and Life Sciences College? I thought that was interesting.

Haha, hooray for jumping through way too many hoops to try and graduate next semester! I went to advising and all over campus today to get a myriad of different forms for next semester/graduation. I got forms to:

1. Add a philosophy minor
2. Get rid of the English: Creative Writing major that, for some reason, is still on there, despite my apparently taking it off last spring
3. File for an “area of emphasis” in statistics, seeing as how the one other stats class offered that’s not a business stats class isn’t offered next fall, and I’ll have the 18 credits needed for an emphasis
4. Apply to take 22 credits
5. Apply to take more than 22 credits
6. Apply for actual graduation (!!!)

And I have to do all this before the 14th. According to Dr. Craig, I’m all set for graduation in regards to credits/requirements. Sweet!

Now to wait for registration!

I just got home from my graduation today.

It was exciting and very scary. Mr. Kaag spoke, which was cool, and so did Ben. They both rocked. I got a little bronze honor cordy thing, which is kinda disappointing (since I could’ve done better) but oh well.
Mr. Blount told me that I got a 99% in his class–the highest grade in all the periods.
Train o’ Rockin’…aw, screw it. I never have to go through physics again!

Now I never have to see Lead again, the little loser!

Off to the Senior Party!

Stupid physics…(oh, and the last day of school)

I am very disappointed in my Rube Goldberg machine, which conveniently quit working when Mr. Blount came to check it out for a grade. It’s as if it hates me for some reason.

But anyways, it is the last day of high school…ever. Kinda sad, kinda scared, kinda excited.
But mostly pissed about physics. It ruined my whole day.