So this was something Nate and I were talking about yesterday, but yesterday was BIRTHDAY MADNESS, so you’re getting this a day later instead.

I bring you my TOP FIVE BOOKS!

The rules are:
1. They have to be fiction.
2. They can’t all be The Caine Mutiny.

So let’s do it. From fifth to first:

#5: The Ox-Bow Incident by Walter Van Tilburg Clark
Choosing #5 was hardest, because there were three or four books that I could very easily see as my fifth favorite book of all time. But the winner ended up being The Ox-Bow Incident, mainly because it’s the book whose story has stuck with me the most out of the possible candidates. It speaks of the consequences of mob mentality and of abandoning established methods of seeking justice. Really good. Read it.

#4: 20,000 Leagues Under the Sea by Jules Verne
I’m not a science fiction fan by any means, but I absolutely love Verne. And 20,000 Leagues Under the Sea just beats out Around the World In Eighty Days as my favorite of his stories. There’s just so much that happens and it’s written in that very characteristic “my writing style is rather dry LOL WAIT NO IT’S ALL AN ILLUSION YOU ARE ON THE EDGE OF YOUR SEAT NOW AREN’T YOU” style that Verne has (at least in my opinion). I also really like stories about ships and the sea for some reason.

#3: Lolita by Vladimir Nabokov
Okay, does Lolita focus on a disturbing topic? Yes. But is it beautifully written? YES. I have never had my reading arrested so many times by passages that just hit me in the heart with how astoundingly beautiful they are. Nabokov does this thing where he hints at a metaphor offhandedly and then, like 100 pages later, brings it up again and fleshes it out in a way that builds in the consequences of everything that’s happened in those intermittent 100 pages. And he does it with such smoothness that you don’t even notice it until you’ve finished the passage and go “…oh.” and have to set the book down to give your heart time to stop palpitating.

#2: The Great Gatsby by F. Scott Fitzgerald
Would I have liked this book as much if I had been “forced” to read it in high school? I don’t know. I actually had a choice – it was this or some other book that was not on my “these are the books I need to read” list – and I remember I was the only one in our 10th grade class that chose this. I like Fitzgerald’s style in general (This Side of Paradise is another one of my favorites of his), but I just have a thing for the way the characters in this story are written and developed. And his style is nice and simple, but not boring. “Simple” in the sense that there is an ease to which the story unfolds, despite the fact that it is unfolding to uneasiness the whole time. I just…I really like this book.

#1: The Caine Mutiny by Herman Wouk
I don’t quite know how this book ended up on my “these are the books I need to read” list given how few people seem to know that this book even exists, but I’m glad it did. The sad part is that I can’t tell you exactly why I like this book so much. I just do. The characters, the writing style, the plot, the general mood it gives off – I just like it. I love it. It’s absolutely my favorite book. I think I first read it when I was in junior high and it has yet to be dethroned. Go read it, yo. 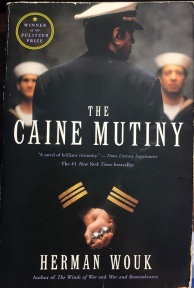 (Also, the copy I have has the best typeface.)

Posted in: Books | Tagged: 20000 Leagues Under the Sea, favorite books, lolita, the caine mutiny, the great gatsby, the ox-bow incident

So I’ve seen about seven of my Facebook friends post something along the lines of “what book should I read next?” as their little status update thingy. Even though maybe two people from Facebook check out this blog on a semi-regular basis, I’m posting here my top 10 favorite/most highly recommended books with little itty bitty one-sentence synopses. I know I’ve done this a couple times before, but the list keeps changing ever-so-slightly and hell, it’s always good to have book recommendations close at hand, right?

9. Watership Down by Richard Adams
One-sentence synopsis: a colony of rabbits set out in search of a new warren and face many perils on their journey.

8. On The Beach by Nevil Shute
One-sentence synopsis: In a post-WWIII world, we get a glimpse into the slow suffering of those living in Australia as they wait for the atmospheric winds to bring the nuclear fallout down from the north.

7. The Ox-Bow Incident by Walter Clark
One-sentence synopsis: A group of justice-seeking townspeople (and two drifters) set out to find and punish three men presumed to be cattle rustlers and murderers.

6. Around the World in Eighty Days by Jules Verne
One-sentence synopsis: Wealthy (and badass) Londoner Phileas Fogg wagers that he can travel around the world in 80 days.

5. Watchmen by Alan Moore, illustrated by Dave Gibbons
One-sentence synopsis: In this graphic novel, an ex-super hero is murdered, his fellow ex-super heroes speculate about his death, and we are privy to an intricate tale of their past and present lives in an alternate 1980s time.

3. The Great Gatsby by F. Scott Fitzgerald
One-sentence synopsis: Nick Carraway  becomes a neighbor to the wealthy, party-happy, mysterious Jay Gatsby and learns more about him and those he associates with through a series of social and private encounters.

2. Candide by Voltaire
One-sentence synopsis: A sheltered young man, influenced by his teacher, is convinced he lives in the best of all possible worlds (LEINBIZ REFERENCE ZOMG), even as he experiences all sorts of exciting disasters.

1. The Caine Mutiny by Herman Wouk
One-sentence synopsis: US Navy Ensign Willie Keith finds himself on a WWII US minesweeper ship that has happened to fall under the command of an insane captain.

Posted in: Books | Tagged: around the world in eighty days, candide, favorite books, lolita, on the beach, the caine mutiny, the great gatsby, the ox-bow incident, waiting for godot, watchmen, watership down

Few books are simultaneously more deserving of and more inappropriate for NES game format than The Great Gatsby. This image alone captures the greatness:

It’s short, easy, and freaking fantastic. Nick Carraway’s weapon is his hat (or hats, rather), but they look like pitas in the extremely pixilated format which makes things even more hilarious.

More classic novels need to be made into retro NES format (except To Kill a Mockingbird, that just needs to stay away from me for the rest of my life). Lolita would be rated AO and would attract creepy but surprisingly articulate men who like pixilated preteens.

Hello ladies and gentlemen. There’s this note that’s been going around on Facebook where people list the top 10 books that have influenced them the most, or will stay with them the most. I decided that instead of posting this on Facebook (which I’m beginning to hate more and more), I’m putting it here.
The books I chose I chose because of their impact on me—be that from their emotional impact, their intellectual impact, the story itself, or the style of the writing. I explain in each case. It was hard to choose books that influenced me rather than choosing my favorite books, but I think I did this as unbiased as possible. Plus, the two overlap quite a bit.

1. Watchmen – Alan Moore and Dave Gibbons
This might be first because it’s the one I’ve read most recently, but it’s also first because it’s freaking awesome. The story’s intense, it’s very intellectual, and the art is superb. Read it!

2. The Monadology – Gottfried Leibniz
No, I’m not just putting this on here because Leibniz is a smoldering sex pot. Despite the “out-there” factor that is so high with the Monadology, the general idea of determinism that he expresses throughout it (and a lot of his other stuff) actually kind of lines up with how I see things.

3. Candide – Voltaire
I FREAKING ADORE Voltaire. This book is very funny if you know what it’s making fun of (hint: pretty much everything). And even though Voltaire makes fun of Leibniz, I still love this book.

4. The Caine Mutiny – Herman Wouk
YAY! This is my favorite book of all time, but it’s also on here because the story is AMAZING. Wouk is very good at building tension (just wait until you get to the actual mutiny; good luck putting the book down). It’s also freaking hilarious in parts.

5. The Chosen – Chaim Potok
I can’t remember when it was I read this, actually—I only remember the plot and the characters that have stuck with me since. This was one of two books that left me crying at the end. Very emotionally impactful. It’s about two Jewish boys, one of which does not want to follow in his father’s footsteps, if you want to know the very summarized plot.

7. On the Beach – Nevil Shute
The premise of this book is very intriguing: it examines a post nuclear war world from Australia’s point of view as the country sits and waits for all of the fallout from the northern hemisphere to drift through the atmosphere down to them. That’s really all you need to know.

9. An American Tragedy – Theodore Dreiser
This is a long book and seems kind of boring at the beginning, but once the “tragedy” happens, it really picks up. You get into Clyde’s head and feel his desperation.

10. Age of Reason – Jean Paul Sartre
I read this awhile ago and for some reason I still really like it. Probably because it’s existential.

Posted in: Books | Tagged: age of reason, an american tragedy, candide, crime and punishment, favorite books, monadology, on the beach, the caine mutiny, the chosen, the great gatsby, watchmen