What is this “air quality” you speak of?

Me: “Walking is healthy because it helps relax you, helps get your heart rate up, and helps get you outside to absorb some of that sweet vitamin D.”

Me: *walking 15 miles outside anyway* “HHEEAALLTTHHYY…”

It’s hot, it’s smoky, and I feel like every time I go outside I lose like 10 minutes off my life expectancy due to said smoke, but I’m sure I’ll be missing this “weather” once it gets cold and horrible again in a few months.

So at about 3 this morning, Nate drove me to the Calgary airport so that I could fly out to Seattle at 6 (he got me there so early because he has to work on Monday and I don’t want him to get super sleep-deprived staying up all night with me). I hung out in the airport and we flew into Seattle no problem. There was a little bit of a haze in Seattle, but no rain, so I was happy about that.

For once I only had about a 1.5 hour layover there, so I found my gate and just worked on Prime on my laptop. About half an hour before we started boarding, the lady at the gate announced that the Moscow/Pullman airport was basically drowning in smoke, but that the smoke was supposed to burn off by the time we were supposed to get there. That was a little worrying, but I figured that’s what would happen and that we would be able to land.

We circled above Moscow/Pullman until we had just enough fuel to fly ALL THE WAY BACK TO SEATTLE because we couldn’t land. Once we’re back at Sea-Tac, the stewardesses informed us to all go to the Alaska Airlines help desk just across from our arrival gate to see about getting rebooked for a flight.

Well, since school starts tomorrow, the flight was full of frantic students who were desperate to get to Moscow or Pullman in time for classes the next day. A lot of them were foreign to the U.S. and were freaking out because the help desk ladies were telling them they might have to fly them to Spokane instead and most of them had no idea where that was and no way of getting transportation to Moscow/Pullman on a Sunday. They were also saying that the Spokane-bound flights for the rest of the day were booked up and they would have to fly in the next day instead.

That would have been my fate as well, but luckily I had texted my mom before we left for Moscow/Pullman and told her we might not be able to land. When we didn’t show up at Moscow/Pullman, she called my dad, who has like extra-super-VIP status with Alaska because of all the flying he does. He managed to call the airline while we were heading back to Seattle and he got me the last seat on a slightly later flight to Spokane.

So I flew to Spokane and my mom drove up to meet me and take me back to Moscow. And here I am.

And holy hell is it smoky here. 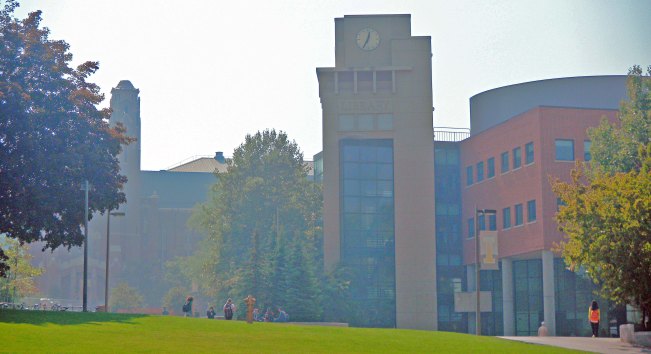 I missed the “early” bus this morning and was going to walk to campus, but last time I walked in this much smoke my eyes hurt for like three days straight. Since I have to proctor my students taking their exam today, I decided I would kind of prefer to have my eyesight for the morning and just waited for the “late” bus.

But tomorrow is WALKING DAY! I love Fridays for that reason alone. I should go to the fair, too. Anyone want to go to the fair with me?