So I’ve edited 45 more (single-spaced) pages of Prime since I started working on it about a month ago. That may not sound like much, but it’s 45 more pages than I’ve edited in the past year and a half. (Blame Nate, he’s giving me the motivation to write/edit.)

I seriously doubt I’m going to ever do anything with it (mainly because it will still be crap even after the 30th edit or whatever), but it’s nice to be working on it again. As crappy as Prime is, it’s my baby and I love it.

I’m pretty sure hell has just frozen over, as I’ve decided to go back and edit Prime some more. I was on an editing streak way back in summer of 2013, but then I stopped because I got to a rough part at the end of one chapter and I wasn’t quite sure where to go from there to get to the next chapter I’d written. And being me, I didn’t want to just skip a part and continue editing—I wanted to edit everything in order.

But I’ve had the urge to work on that story for about a week now, and today I finally just went back and started where I’d left off. I finished editing the chapter I’d left and then continued on. Is the edit good? Not really. But it’s better than what it was, and it’s not like there won’t be more drafts of this nonsense (if I don’t just get completely sick of it and delete it off the face of the earth) in which I can make things even better.

That is, if an 80-or-so page setup for a really horrible “divide by zero” joke is even capable of being bettered.

So yeah. Prime’s still around and it’s finally going to be worked on again. Yay for everyone.

It’s My Infinitive and I’ll Split It if I Want To!

I’m trying to edit Prime so that it sucks less. I’m to the point in the story where the main character, 27, is talking to the imaginary unit i. And of course I wrote the damn thing in first-person, so I’m getting phrases like:

What in the nightmarish hell was I thinking.

No one will ever want to read this nonsense.

A Wordle for Prime

It’s because I’m bored. And because I totally forgot I wrote this story, haha. AND because Wordles are fun. 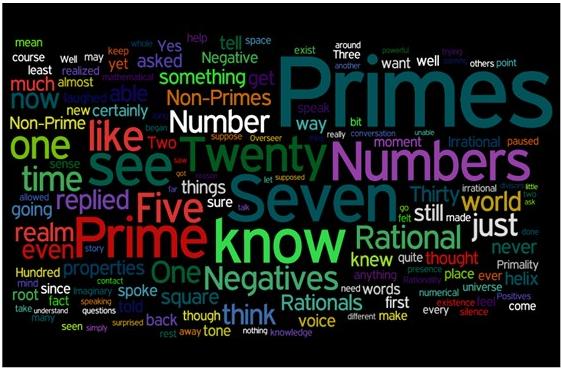 This small accomplishment was very needed

So I actually was able to finish my first NaNoWriMo, with a final official wordcount of 50,027.

It was totally awesome…going to do it again next year, hopefully with a better novel resulting.

The plot needs to thicken by at least 7,500 more words!

OH MY GOD, Prime was not meant to be a novel. A novella, yes, but not a novel. My plot petered out at about 37,000 words or so, and ever since I’ve been pretty much connecting scenes and writing filler dialogue to see what comes of it. I’ve gotten some good stuff that might replace old stuff, but putting all this crap in detracts from the story, I think. But what the hell, I love writing this story.

Hahaha, dammit, I’m still way behind for my wordcount. The plan in place will get me to 50,000 by the 30th, but the little graph is discouraging me…
Also, I may run out of plot.

Percentage of story so far written that is dialogue: 92.1%
Let me reiterate from blogs prior: my story is about NUMBERS. Numbers do not have physical properties. Thus, I cannot write about physical properties—visual, action-based, or otherwise—in this story.
Thus I’m stuck with dialogue and the thought processes of my MC (yes, yes, I know numbers also can’t talk or think…shut up, it’s my world!). And since I’m a stickler for interesting, realistic dialogue, I’m finding it very difficult to create quantitiy over quality with my dialogue.

Why in the hell did I choose a NaNoWriMo plot that made no allowance for physical description? I’m realizing how much I rely on that in my writing. Oh well. A chance to improve on my dialogue, I guess.
Even though I haven’t made much progress yet, I’m finding the whole NaNoWriMo thing more of a stress relief than I thought I would. Which is odd.

General synopsis of my story, by the way:

Once the new outlook took hold in the Numerical community, it was difficult for any one of the Positives to turn against it. The idea that they were superior to the Negatives chewed with an insatiable hunger at their minds and turned them against their counterparts with a speed and illogicality that had never before been witnessed in the Rational world.
The divide widening, the 0verseer useless and indecisive, the Primes alone were unaffected. A collective anachronism from a time when unity was a common theme throughout the universe of mathematics, they alone stood left to bear the decision of whether to restore harmony to the Rationals, or to banish the Negatives to a different realm, perhaps to the Irrationals or the Imaginaries, or even to a new category of Numbers all together.
But they needed an insider–a Number not of their own caliber, a Number with connections in both the Positive and the Negative realms–in order to determine the best course of action.

And in the end, they chose Twenty Seven.

Yeah. This stems from the short writing exercise thingy from Intermediate Fiction I put up here a few months ago.

So today it begins.

Or tomorrow for me, really, since I went to bed around 2, woke up at 4, and spent from 5:30 until 1 getting back to my apartment up in Vancouver. But I wrote a bunch of crazy on the plane before I started getting motion sickness (of course), so we’ll see.