Hey, so I’m in like the busiest part of the semester and what happens? My freaking laptop craps out on me.

Luckily, my wonderful husband was able to help bail me out today by going to Best Buy (while I panicked in my office and tried to use my office mate’s computer to get some work done) to pick up a new laptop for me. He then stayed and set it up while I tried to finish my work.

I love him so much.

UGH so today was eventful.

Last night, Vaio was acting kind of strange, giving me a bit of trouble and just running really glitchy-like. This morning it was completely dead. Basically, it was acting like it did back last May when we had to take it in and wipe the hard drive and basically start from scratch.

So I considered a few things:

I made the decision to use my teaching award money to get a new laptop. I took the bus to a Best Buy on the other side of town and got myself a new shiny! It’s an hp with a touchscreen and a 1 TB harddrive. It’s pretty. Hopefully it will last me a long time!

Now I have to name it. I can’t call it “Vaio” ‘cause it’s not a Vaio, and just calling it “hp” sounds dumb.

I shall think on it.

So the dude at VGH put in a new hard drive and reinstalled windows, so now Vaio III lives once again. Except he’s empty.

And now I’m paranoid that this is going to happen again, especially since no one knows exactly why the hard drive failed. Just watch: as soon as I get to Calgary, BAM! Dead Vaio.

I reiterate from yesterday: it’s a damn good thing I’m paranoid about things like this happening. Three backups in three different locations across Moscow = good.

Also, props to the super nice VGH guy who could probably tell I was in panic mode and stayed nice and calm and congenial. Thanks for all your help, dude!

Well, it’s a good thing I do monthly backups of all my important files, ‘cause Vaio III just bit the dust totally out of the blue. Apparently the hard drive crashed but no one knows why.

Back up your crap, people.

Edit: DAMMIT I lost the order for all of May’s songs (hadn’t backed that up ‘cause it’s not June yet). I guess I’ll just list them alphabetically rather than by date acquired this month. BUGGER.

Again: back up your crap, people.

I’mma go set him up.

Vaio II is no more.

His hard drive had a serious mental breakdown, so I took him in to see if someone could fix him up. Nope.

Big Compy’s still up and running, so I’m not totally helpless and curled up crying on the floor due to lack of internet.

Edit: His successor, Vaio III, has been purchased. He looks like this.

LOOK WHAT I MADE LOOK

Want to see my pretty? Or part of it?

This is the spreadsheet.

Here’s what it looks like when I select DAISY as the file type. 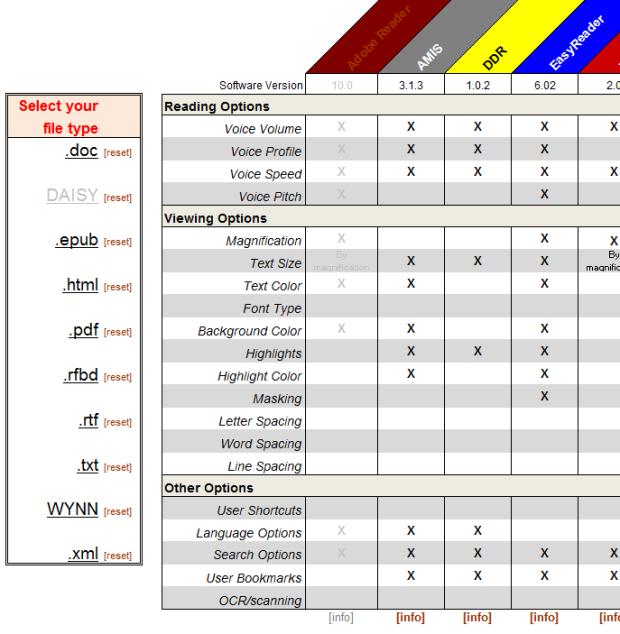 Here’s what it looks like when I select .epub as the file type.

Like two days ago, I had no idea you could do this in Excel. Excel has gained a whole new level of respect from me. Not that it cares.

(In my head, Excel is the most arrogant of the Microsoft Office products)

The obsessive part of me wants to now go back and fix the code for this so that it’s not six billion lines long.So that might have to happen soon.

Just taught myself how to write macros in Excel. A lot of them. In like two hours. It was fantastic.

I basically figured out how to do what I was trying to do in R in Excel. It’s actually a lot easier to implement in Excel, especially since (I totally just learned this, pardon my beginner’s excitement) you can create a hyperlink in a cell that links to another cell within the same spreadsheet. Totally had no idea you could do that.

But now I can do stuff in Visual Basic. Woot.

Claudia vs. Spyware: The Epic Battle

So today sucked. Well, it sucked until about 7 PM, when I finally solved the problem that was causing things to suck.

I got to school this morning and discovered an issue with my computer when I started it up—every time I moused over the taskbar, my mouse would to the little “busy” symbol and I couldn’t click on anything. When I’d ctrl+alt+delete, the taskbar manager would produce the busy sign as well, so I really couldn’t do anything.

Which was obnoxious as hell.

So I literally spent from 2 to 6:30 this afternoon trying to figure out what was wrong. I realized sometime around 3 that things started freezing up (busying up?) when a certain icon loaded onto the taskbar, but since I couldn’t mouse over it, I had no idea what the little icon was.

After another “let’s adventure around in Safe Mode” hour, I finally was able to figure out that the symbol stood for something called “Relevant Knowledge.” And, after looking it up on Google, I find out that it’s…surprise!…spyware, and that, with Vista, it pretty much shuts down your ability to do anything.

Fast forward to two hours later, and I have finally gotten rid of all the crap R.K. has put on my compy, and, after the 100th restart of the day, Vaio II is back to normal.

If you ever see Relevant Knowledge anywhere, get rid of it ASAP.

Vaio II has arrived.
And Vaio II looks GREAT. He’s so quiet! He can run on battery! He has FREE HARD DRIVE SPACE!!
Yay.

Vaio’s screen kinda bit it. I was sitting there listening to music and moved the screen to adjust its tilt, and it instantly cracked and spider-webbed from the point of contact. So I now can see nothing but this beautiful spider web pattern on the main screen, and have an external Dell (ewww!) monitor hooked up so I can actually use it.

So yeah. Vaio’s on monitor dialysis. Other than that (and its lack of hard drive space and 400 db fan), it works fine still. But I guess I can’t really use it as a laptop if I have to hook it to an external monitor (even though it was already tethered via power supply and internet). 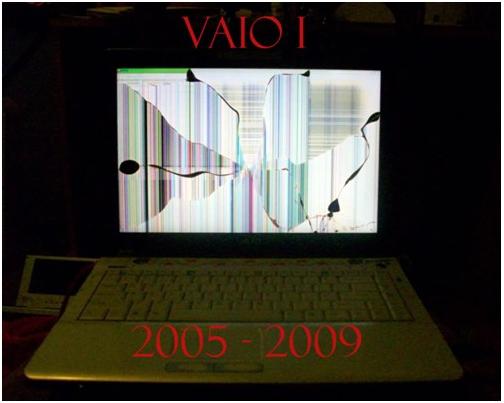 Let’s play “Which is Hottest?”!

Boredom sets in on Sundays . Anyway, I’m sitting here with this little press-button temperature gauge. If you point it at something and press the button, it tells the ambient temperature surrounding the object.
I’ve been noticing that the air that comes out of my computer’s vent as well as the metal light above my desk are both extremely hot.

So now, as a little fun game, let’s play WHICH IS HOTTEST? Is it…
a) the air coming out of my computer, or
b) the metal light?

Well, the answer, of course, is E’raina .
But seriously.
The air coming out of my computer is a pleasantly warm 101.1 degrees, while the metal light is a cozy 130.1 degrees.
We have a winner!

Thanks for playing. Your winnings will be tallied, multiplied by .05%, squared, factored, then deducted from your taxes. In the end you will receive nothing. In fact, you’ll probably end up owing us money.