So Calgary’s first cat café is opening this weekend.

Two things that they’re doing that I really like:

Hopefully Nate and I can go there someday (and order something non-coffee from the menu, haha), though they’re already quite booked into the future.

Nate and I were living in this weird dorm-type house, except it was much bigger than a dorm and had like four bathrooms. Each bathroom’s main feature was a giant walk-in shower that didn’t actually have walls or a curtain (?).

Anyway, Nate had to go off somewhere for like a three-week stretch, so I stayed home alone. After a few days, I started noticing that these small little fuzzy creatures had started to appear in pairs on the shower drains. At first I could just scare them away by turning on the light, but after a little while, they wouldn’t spook at all and would just remain on the drain regardless of what I did.

They slowly started increasing in size and were kind of a little scary, but I eventually got brave enough to tap one of them with my foot. Turns out that they were kitties! So of course I did the only thing I could do—I took the kitties off all the drains and started petting them and loving them. Every time I turned around, there was another pair of cats on a drain or a rapidly growing kitten on a drain.

This continued until I had amassed about 40 cats over the span of a few days. Nate came home and I was super excited to tell him about the magic drain cats. He quickly discovered that they were not magic drain cats but rather were cats who were getting into the house through an open window that I had not seen.

I was worried that he would want the window shut, but he saw how happy I was with all the cats and said that we could leave the cat window open.

Dudes, I actually woke up crying from happiness because I was so excited that we could keep getting free cats in my dream.

Reading about all the amazing cats at this cat sanctuary makes me simultaneously sad (to see how much many of them have suffered) and happy (to see how much they’re cared for and how much people are trying to get them adopted out or sponsored).

I know this blog post probably won’t actually get posted until after Christmas (and maybe after my birthday, haha), but if anyone would like to make a donation to the sanctuary as a gift to me, I’d appreciate it.

Okay, so I know I’m behind the times in this (most likely) because that’s just how I roll, but I just downloaded the cutest app: Neko Atsume!

You get a yard and some cat food and can use the food to entice cats to hang out in your yard. The cats show their gratitude by bringing you fish, which you can then use to buy all sorts of goodies to fill the yard and keep the cats coming.

There are a bunch of “regular” cats and then there are some rare ones that appear every once and awhile if you’ve got the right items in your yard. 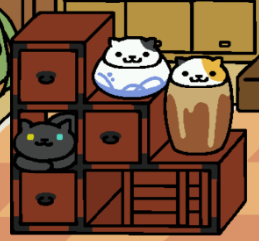 Seriously. Is this cute or what?

Edit: paused it at just the right spot.

I should crank a sample for Jazzy one day and see how she responds to it. It’s an interesting idea.

Annabelle (not the movie)

Since she’s all the way back in Moscow and I miss her, I shall spam you with photos. ‘Cause why not. 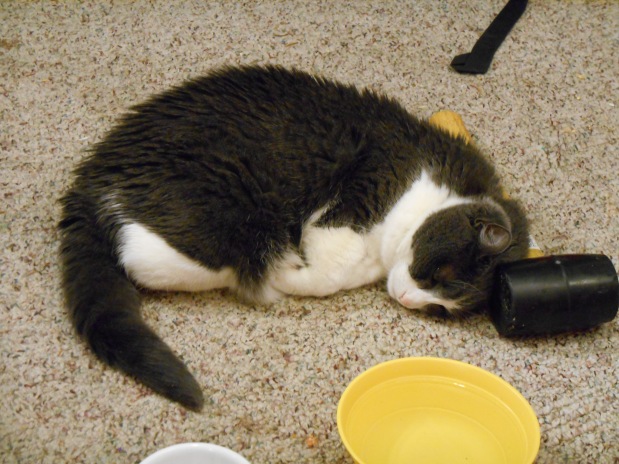 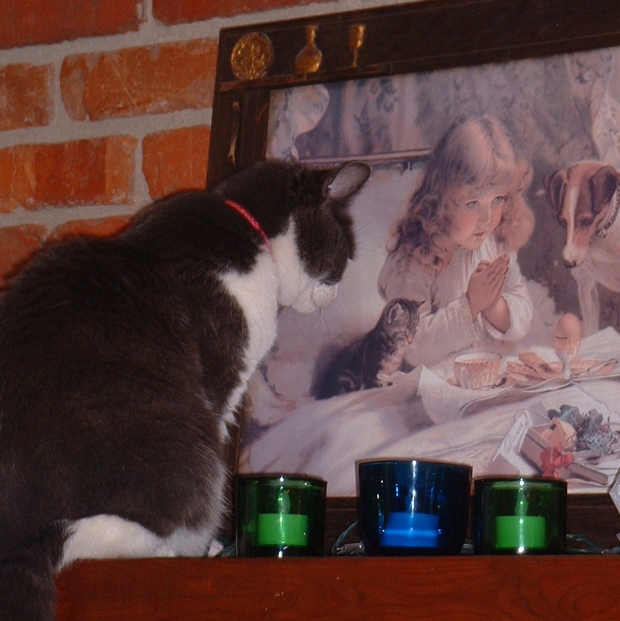 For the past five months or so, my mom and I have made it a routine to go visit the Humane Society on Friday afternoons. So today we went and I said goodbye to all the cool kitties there. Here are some pics of my favorites.

This is Cleo. She’s freaking awesome and needs to be adopted! I think the reason she hasn’t yet is because there’s a big warning on her cage that she does NOT get along with other cats. She’s super friendly with people, though.

This is Cheshire. He’s giant. My foot is for scale purposes. 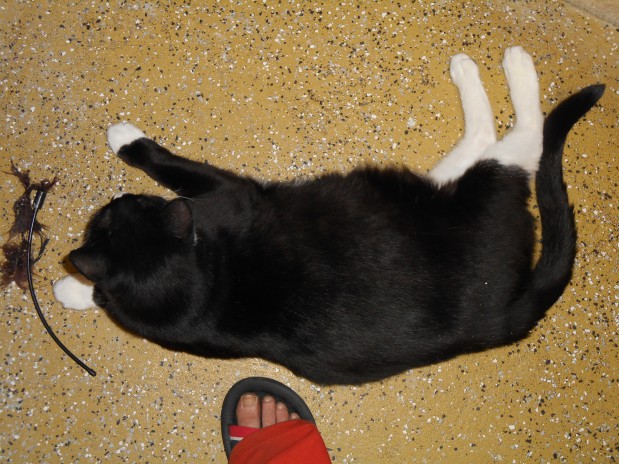 Martina! She’s been there for like 6 years now. In the pic she’s getting love from my mom. 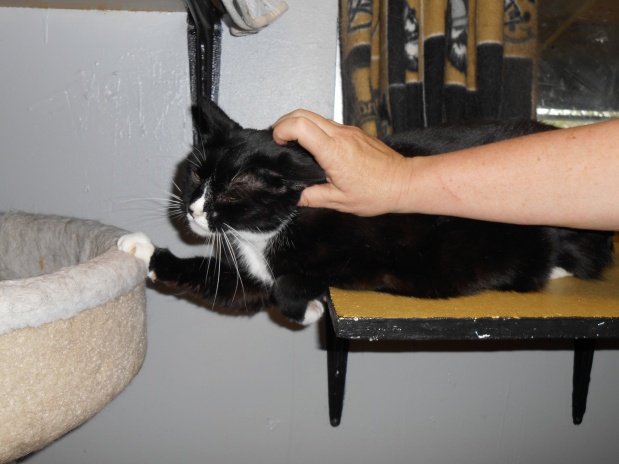 My mom adopted a kitten from the Humane Society! Observe the cuteness:

(New and better pic inserted, ‘cause the old one was grainy and blurry.)

His name is Raymond Cat and he’s probably the most chill cat I’ve ever seen. I’ve heard him meow like twice and he just kind of goes with the flow.

There’s a new giant orange cat at the Humane Society! His name is Tiny and his info says he’s 22 pounds. Not as big as Jupiter, but he’s still pretty big. He’s a lover, so I bet he’ll be adopted soon.

Sorry, not much going on today.

I’m in love with a cat at the Humane Society.
Serious love.
But I’m heading north in like two months.

Her name is Elle, but I call her Jupiter because she’s waaaaaaaaay huge. She’s at least 20 pounds, is super bow-legged, and is a big roly-poly love.

I really, really, really like her (and I think she likes me, too) and I’d totally adopt her and take her with me to Calgary if I knew that she’d be okay. I’m not taking Annabelle because she was phenomenally miserable in Van and I think it would be a repeat of that…that’s another thing I’m afraid of, I don’t want Jupiter to be miserable, either. I also have no idea how she’d handle a car ride that long.

But NNNNNNNNF I love her.

I hope that she gets adopted by someone who can really care for her and give her all the love she deserves.

There’s this super spazzy black cat that’s been hanging around the house. We call him “Boyfriend Cat” because we like to pretend he’s Annabelle’s boyfriend (even though she’d probably murder him if she got the chance). 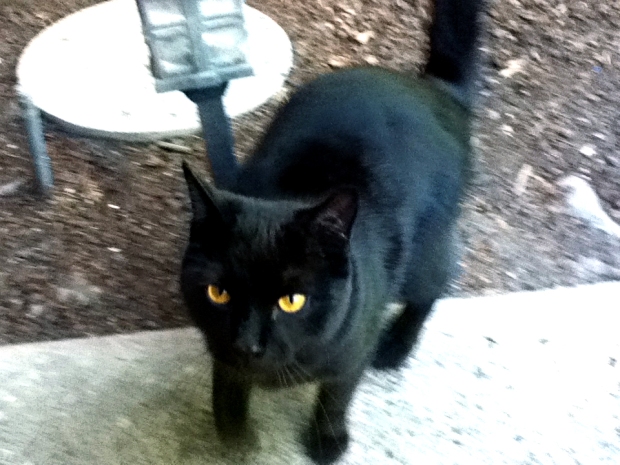 THIS IS SO IMPORTANT 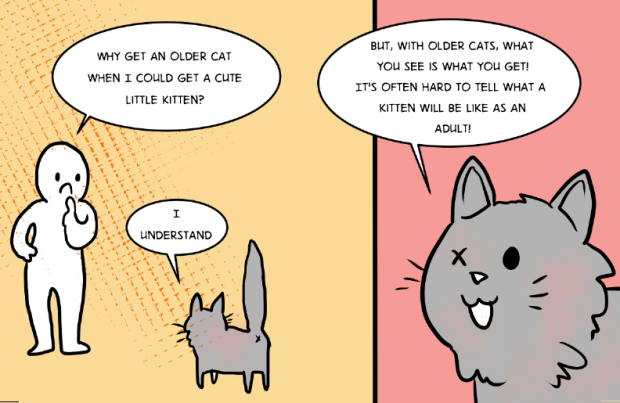 I found some more pics while I was packing this afternoon. Therefore I shall share them.

This is me with my cat Wooder. 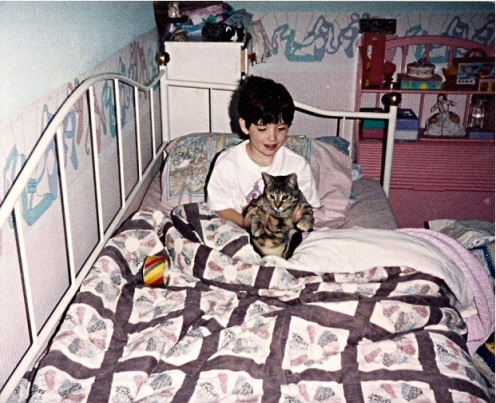 This is an older me with an older Wooder. Note the drawing on the wall. My mom let me draw and write all over the walls in my room when we lived in Troy. How awesome is that?

This is my dad with Wooder. I don’t know if I was alive yet.

Me with Brutus (the black one) and Lena, siblings from a litter from my mom’s older cat, Gracie. Haha, I have so much paint on my pants. And the cats are like let me go, weirdo.

I was a cat lady from birth.

The ONLY good thing to come out of 4chan