Hello, foolios! So year 7 of this project is now complete. It was a pretty damn good year for music, so without further poopin’, let’s get down to the review.

The Five Stars
Listed in order of acquisition!
Lone Digger by Caravan Palace
Hula Hoop [Mark Ianni Bootleg] by Omi
Tightrope by WALK THE MOON
Hide and Seek (A Capella Cover) by Dan Wright
Gone by JR JR
Jealousy by Robert DeLong
Kids by OneRepublic
Tilted by Christine and the Queens

The five most beautiful/touching songs of the year:
Hide and Seek (A Capella Cover) by Dan Wright
Silhouette by Owl City (this is such a heart-wrenching song, holy hell)
Romeo & Juliet : Act IV, Scene LII, Death of Juliet performed by The London Symphony Orchestra
The Revenant Main Theme by Ryuichi Sakamoto

The Overall Top Five
Tightrope by WALK THE MOON
For the second year in a row, WALK THE MOON takes top spot here. The fast tempo of this song is great, and I love the fact that it switches from 4/4 time to 3/4 time for the chorus. Not a lot of “popular” songs have a time change like that, let alone such a prominent one.

Gone by JR JR
This song has the best energy. I love the drums and the whistling. It makes me want to dance.

Tilted by Christine and the Queens
I might be a little biased with this one, as I just recently downloaded it and am still in the “zomg must listen to this 50 times in a row” phase, but there’s not a single thing I dislike about this song. It’s got such a unique sound and is simultaneously upbeat and kind of haunting. I’ve had it stuck in my head ever since I downloaded it.

Hide and Seek (A Capella Cover) by Dan Wright
Better than the original, in my opinion (sorry, Imogen!). Can I have a favorite chord of the year? If I can, it’s definitely the chord at 2:49. I love it.

Hula Hoop [Mark Ianni Bootleg] by Omi
As anyone can probably tell by looking at the songs I tend to post on here (or just by looking through my yearly music lists), I have a soft spot for remixes and mashups of songs that I enjoy. This is an example of that. The original Hula Hoop is okay (I think it’s got 3 stars from me?), but in keeping with the apparent theme of this year’s top five, this remix has a lot more energy and oomph to it. Kind of techno-ey. 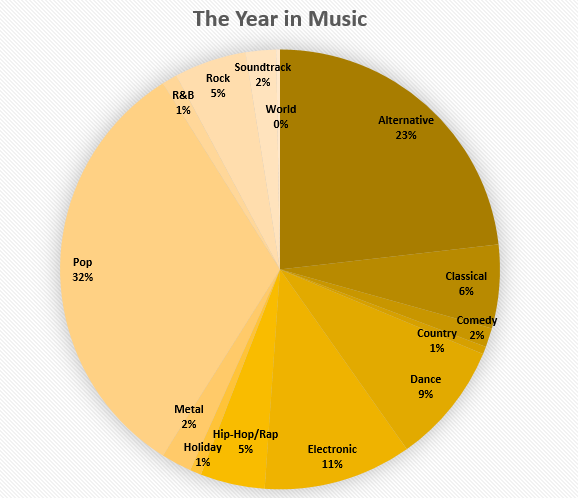 Pop dominated in terms of the number of songs downloaded, but things were a little more even in terms of playcount.