Today we’re going to talk about another measure of association: the point-biserial correlation coefficient!

Step 2: Compute the test statistic, a t-value. To do so, the actual correlation coefficient, rpb, must be calculated first. This calculation is as follows:

To compute the t-statistic, the following equation is used:

Step 3: Obtain the p-value associated with the calculated t-score. The p-value indicates the probability of observing a correlation as extreme or more extreme than the observed sample correlation, under the assumption that the null hypothesis is true.

Step 4: Determine the conclusion. If the p-value is larger than the prespecified α-level, fail to reject the null hypothesis (that is, retain the claim that the correlation in the population is zero). If the p-value is smaller than the prespecified α-level, reject the null hypothesis in favor of the alternative.

Example
Let’s look at my music data again! I want to see if there is a significant correlation between the number of times I’ve played a song and whether or not it is a “favorite” (i.e., has 3+ stars). I suspect, of course, that I play my favorite songs more often than my non-favorite ones. If I code “favorite” as 1 and “non-favorite” as 0, then I will expect a positive correlation. I took a sample of n = 100 songs and let α = 0.05. 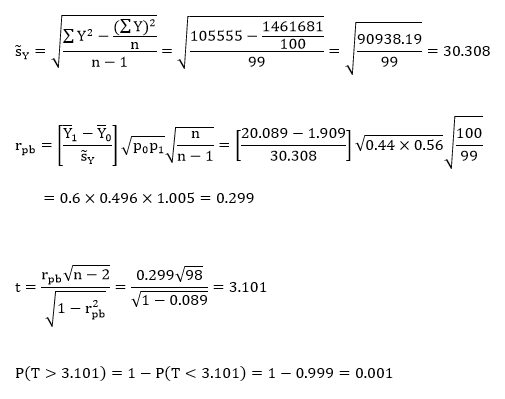 Since our calculated p-value is smaller than our α-level, we reject H0 and conclude that the correlation in the population is significantly greater than zero.