Week 30: The Friedman Two-Way Analysis of Variance by Ranks

Let’s return to nonparametrics this week with the Friedman two-way analysis of variance by ranks!

When Would You Use It?
The Friedman two-way analysis of variance by ranks is a nonparametric test used to determine if, in a set of k (k  ≥ 2) independent samples, at least two of the samples represent populations with different median values.

What Type of Data?
The Friedman two-way analysis of variance by ranks requires ordinal data.

Step 2: Compute the test statistic, a chi-square value. It is computed as follows:

The ranks themselves are obtained by ranking each of the k scores of a subject within that subject. That is, an individual’s scores in each of the k conditions are ranked from highest to lowest (or lowest to highest) for that particular individual. See the example below for more explanation.

Step 3: Obtain the p-value associated with the calculated chi-square statistic. The p-value indicates the probability of observing a chi-square value equal to or larger than the observed chis-square value from the sample under the assumption that the null hypothesis is true. The degrees of freedom for this test are k – 1.

Example
The example I want to look at today is similar to last week’s. The data come from a previous semester’s STAT 213 grades. The class had two midterms and I final. Taking a sample of n = 20 from this class, I wanted to see if the average test grades were all similar across all three tests or if there were some statistically significant differences. Let α = 0.05.

The following table shows the midterm and final scores as well as the corresponding within-subject ranks. 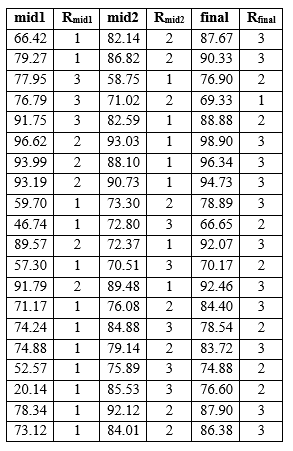 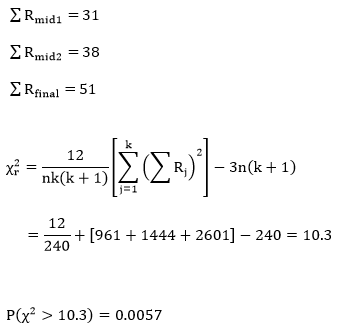 Here, our computed p-value is smaller than our α-level, which leads us to reject the null hypothesis, which is the claim that the median grade is equal across the three tests.

Example in R
No example in R this week, as this is probably easier to do by hand than using R!