Swiggety swog, what’s in the blog?

Today we learned how to use complex analysis to solve real-values integrals that would otherwise be very difficult to solve.

No complex variables in sight in that integral, right (assuming x is real-valued, haha)? Well you can CONVERT THIS TO A COMPLEX-VALUED INTEGRAL AND HAVE AN EASIER TO SOLVE PROBLEM!

That freaking blew my mind this morning in class. I’d go through the details of how to do this, but I’m a lazyass and don’t want to use Word’s equation editor to make like 30 different equations showing the steps to solve. Instead, I’ll link to Dr. Datta’s notes from class. Go to page 10 in the PDF (the page labeled “161”) for this example.

Side note: if any of you ever end up going back to UI or know anyone who will be taking some upper-division math classes there, I highly recommend Dr. Datta. She’s very clear at explaining things, good at giving examples, gives reasonable homework, and is always willing to help.

Today we had our second test in Complex Variables. The test involved figuring out quite a few Maclaurin series for functions involving i. I’ve been ridiculously busy and thus haven’t had a chance to check out the dude behind the Maclaurin series…until now!

So. A Maclaurin series is simply a Taylor series centered at zero. According to the almighty Wikipedia, this type of series is named after Colin Maclaurin, a Scottish mathematician that lived from 1698 – 1746 (so during Leibniz/Newton time and a little bit after). The reason centered-at-zero Taylor series are named after him is because he used them extensively in his Treatise of Fluxions when describing and characterizing points of inflection, minima, and maxima of smooth functions.

This dude was super smart. He entered college at 11 YEARS OLD and got a Masters degree three years later. He became a professor at age 19 and actually got a personal recommendation from Newton to be appointed deputy to James Gregory, the mathematics prof at Edinburgh, and then once he surpassed Gregory’s position, Newton was so impressed that he actually offered to pay his salary for him.

He also had a crapton of children (well, 7 children, which I guess probably wasn’t a crapton back then) and died of complications from edema.

TWSB: C is for Complex Number, That’s Good Enough for Me

Well this is one of the coolest things I’ve ever learned about.

So I’m in Complex Variables this semester, right? Today we talked about how to take limits of complex numbers as well as the closely related topic of infinity.
I’m assuming most people who read this regularly (or just happen to stumble upon it) know at least a little about infinity in the context of real numbers. Mainly, if we represent the reals on a number line, we have a direction that goes off towards negative infinity and a direction that goes off to positive infinity. But does this translate to complex numbers?

Well, not really. When we deal with complex numbers, we deal with the complex plane: a 2-D space with one axis representing the real part of a number and the other axis representing the imaginary part of a number. That is, one way we can think of a complex number is as a set of coordinates on the complex plane. For example, if I had the number z = 3 + i2, I could represent it with the coordinates (3,2) and plot it like this: 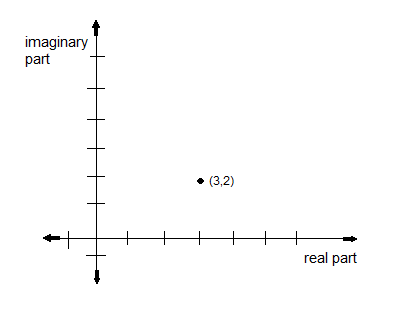 Since we’re now dealing with a plane, we actually have infinitely many directions that can be thought of as infinity—basically, any direction out from the origin.

So how do we define infinity in the complex plane to allow us to, among other things, take limits involving the point at infinity?

The Riemann sphere is a stereographic projection of the complex plane onto the unit sphere at the point (0,0,1). Piccy from Wiki: 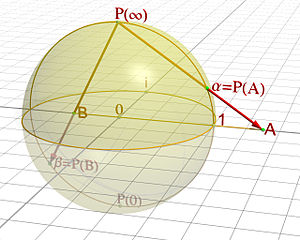 So what does this do? Well, for each point A on the complex plane, there exists a line that intersects both the point A and the north pole of the sphere. This line hits the sphere itself at α, point unique to the position of point A in the complex plane—that’s how the plane is “mapped” to the sphere and that unique mapping point is called the “projection” of point A.

Isn’t that cool? It’s a way to reduce an “infinite number of infinities” to a single point.

We didn’t have time to talk about how we’re going to use it yet, but just that idea is super cool and required a blog post.